Skip to content
My first contact with football was during my summer vacation, before my 1st grade in elementary school. It all started with a selection, which was attended by many children, born in the same year as me, in which I was selected together with another 50 if I remember correctly. Since then, I have had weekly workouts, with 3-4 sessions/week. I remember that at first, we played in gyms at different schools. At that time the field seemed huge to me. Along the way, I had several coaches and I was part of different local teams. I participated in almost every sports competition, representing the general school, and later also the high school. In the 8th grade, I also helped coach the school’s smaller football teams – and from then on, I really started liking the idea of ​​being a mentor.

What I like most about this sport is that it is a team sport – each player contributes to the success of the team, so understanding and trusting your teammates is crucial. By practicing football I developed my team player skills that apply both on and off the field. 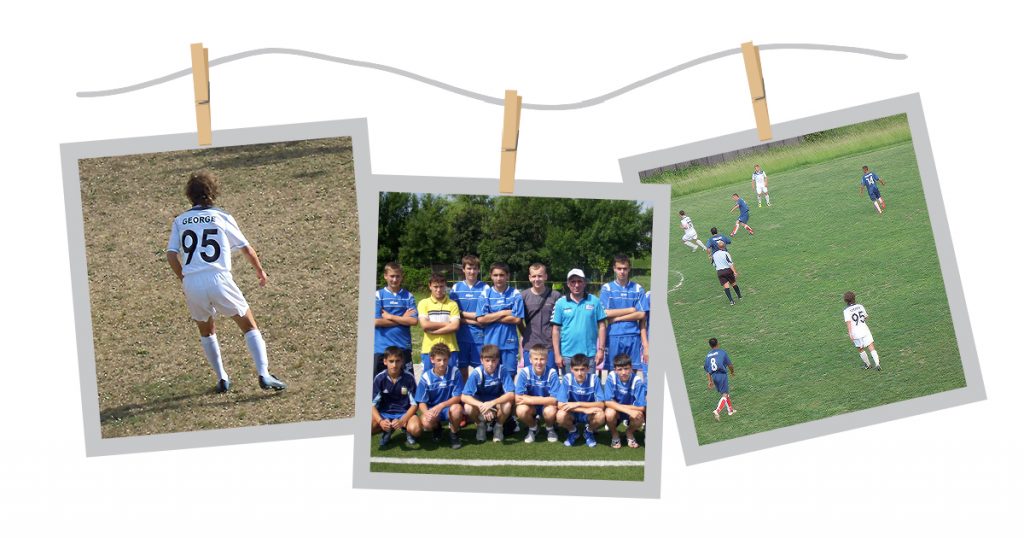 I like playing football much more than watching it on TV, and for this reason, I can’t really say that I have a favorite team. During the time I played football I had different nicknames, the names of some footballers who looked like me in appearance, because of this I started to follow them and I liked them. Initially, it was Puyol (from Carles Puyol), then Luiz (from David Luiz), and now the friends I go to football with every week (less in a pandemic), they call me Modric (from Luka Modrić).
As long as I played professional football, that is, as a member of a club team, from the first grade to the 12th grade, we played 3-4 times a week + a weekend match. Since I started college I have played at least once a week, and sometimes even 2-3 times/week. Unfortunately, with the Covid pandemic and national quarantine, we have not been able to gather with friends and play football – and we have started to gain weight :))
While I played professionally I was mostly a left defender, although I’m right-handed. I was put in that position because the left foot players are fewer than the right one. For example, the team only had about 4 left-foot players and 21 right-foot players. Because of this, now I can use both legs almost as well. This also had a psychological impact, that regardless of the situation, I can adapt to the requirements. Another thing that contributed to this was the fact that I played mostly on a team that had players one year older than me, and the championship was for players 2 years older than me. Now, playing as an amateur, I like to play in all positions, but mostly I like to attack.
I love to play football. I’m not very interested in the game score. I just love the game. Even when I was younger and I had professional matches I didn’t even remember the score. Although I’m not that interested in the score, I really like the feeling when my team scores a goal – even if I’m not the one to do it. I am happier when I give a decisive goal pass than if I would score the goal myself.

I have more pleasant memories of this sport, but what remained pleasant in my mind is the feeling of belonging to a team and interacting with other teammates. I remember with pleasure the training I took in in the summer, in which I only played football and did not practice different techniques or exercises – it was only 2 hours of pure football.
Other pleasant memories are of the matches played in the rain, mud, and snow, in which the hardest thing was to stay stable on your feet and not slip when you have the ball, or when you try to recover it. I still remember my mother’s face when I came in white clothes, full of mud and lime with which the land is marked. However, she always washes them for my next match. Most of all, I think I liked the fact that my family always came to the match and was in the stands and lived the moment with the team, no matter where the match took place in the county.

A very large part of my childhood life was related to this sport.

Although I mostly have fond memories of this sport and although it’s been about 7-8 years since I stopped playing professional football, I still sometimes have nightmares about it. Sometimes I dream that I don’t get to the match on time, or that the coach shouts at me after some mistakes made in the match or in training. I have always been a quiet person, that’s why I think it marked me from a young age that he shouted at me while I was playing football, after certain mistakes. I still remember it as if it was yesterday, the unpleasant sensation when we enter the locker room at the break of the match or after the match, when the hot analysis was done, which was quite bright. I don’t think I’m the only one who has experienced such a thing, unfortunately, this is the football environment.
I think it is very useful for a small child to practice a sport. It is useful for health, it develops many skills, including team-player, organization, adaptability. If I could relive my life, I would also choose to practice this sport.